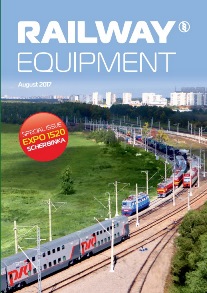 V. Savchuk, I. Skok, A. Polikarpov
Mixed fortunes for Russian rolling stock manufacturers in 2016
Russia’s rolling stock manufacturing sector experienced a year of tough challenges, new hopes and some records in 2016. Some sub-sectors managed to overcome the difficulties caused by the recent financial crisis. However, others required state support in order to remain in operation.

I. Lakin, I. Pustovoy
New service agreements enhance locomotive service and repair efficiency
Following reforms introduced on July 1 2014, most maintenance and repair (MROs) of Russian locomotives was transferred to independent service companies. Almost 15,000 of Russian Railways’ (RZD) locomotives, or more than 70% of the TPS fleet, are now serviced and repaired under a 40-year contract with enterprises which are part of Locomotive Technologies (LokoTech), with the service companies’ revenue depending on the locomotives performance.

J. Harder
Technology transfer and developing mechanical engineering in transport
Technology transfer plays an important role in the global railway industry, particularly in the development of infrastructure and rolling stock. The process has become the primary method of promoting innovation from the development stage to commercialization, and includes various ways of transforming an idea into a commercial product, including transferring patents, developing technical documentation, exchanging scientific results, and creating joint ventures. National railway operators have introduced requirements for localizing commercial products, which have led to the establishment of a large number of local enterprises over the last decade.

E. Rosenberg
The Moscow Central Ring Railway: a railway of innovative solutions
During a meeting with Russian president, Vladimir Putin, the president of Russian Railways (RZD), Oleg Belozerov, summarized the preliminary performance of the new Moscow Central Ring Railway (MCR), which entered service on September 10 2016. State-of-the-art technologies, including a new train control system, have been successfully piloted on the line and have proven their worth in difficult and demanding conditions resulting from a tight time schedule. The train control system had already been deployed successfully in Sochi during the Olympics, and in Moscow, the first months of operation were used to test various individual systems in real passenger conditions.

V. Kerpychev, S. Chuev
How can distributed braking improve freight train performance and reduce delays?
Enhancing capacity is one of key macroeconomic objectives of current strategies to improve the efficiency of railway transportation in Russia. In particular, Russian Railways (RZD) has emphasized this through recent investments in its infrastructure in the east of Russia in order to facilitate the transport of a higher volume of goods from east to west.

Russian Association of Railway Equipment Industry celebrates its 10th Anniversary
In the entire course of history, 10 years is a very short space of time. But for an institution committed to achieving its objectives, and when all representatives are working together towards a specific objective, a great deal can and has been accomplished in this period. The Union of Industries of Railway Equipment (UIRE) was established on June 14th 2007. Its founder and president is Valentin Gapanovitch, and the association consists of 174 member-companies from 34 federal states of the Russian Federation. Together the member companies are responsible for almost 90% of Russia’s total railway industrial output.

A. Savin, E. Matveeva
Russia’s railway Test Loop celebrates its 85th birthday
A proposal to build a special railway loop for locomotive trials was initiated by Alexey Dolinzhev, an employee of the Institute for Motive Power Modernization. His proposal was derived from the understanding that a special closed and level profile railway loop was required to study steam locomotives parameters, a proposal for which was put forward as early as 1901 by Prof. Yury Lomonosov, the pioneer of Russian locomotive performance testing. The idea was finally realised in 1932 with the creation of a loop designed for testing various rolling stock, and railway components and systems in real-life conditions. For the first time in the world, the facility would combine the accuracy of laboratory-based tests with field operating conditions.